To make these wings I used:

About a metre of the main fabric

A couple of contrasting fabrics

I had one larger and one smaller sort of tear drop shape and 3 imperfect circle shapes in large, medium and small.

I cut 4 wings from the main fabric, by drawing the template onto the fabric with fabric chalk and I used pinking shears throughout the project so I didn't have to worry about finishing the edges neatly.

I then cut 2 half wings from the fusible interfacing and ironed these onto the back of the front wings to help stiffen the fabric.

I also cut 2 half wings from the cardboard and these went in between the front and back piece of each wing.

I traced and cut the embellishment shapes from the contrasting fabric and the fusible web. I cut 2 of the large and small tear drop shapes, as well as 6 small circles, 4 medium circles and 2 large circles.

I ironed the first side of the fusible web onto its corresponding shape and then worked out how I'd position them on the wing and then stuck down the other side, again with the iron onto each of the wings.

After that I used the silver metallic thread to stitch around each shape but I didn't neaten and cut the treads but left them sticking out as more sparkle.

I sandwiched the cardboard between the back and front piece of fabric on each wing, pinned it all together and sewed around it so I had two wings.

Then I cut a rectangle of the main fabric, the length of the straight side of the wing, and about 5cm wide, to use as the spine of the wing. I sewed all the way round the rectangle.

I positioned the wings in the centre of the spine, with one wing on top of the other, aligned with the straight row of stitching. I just pinned down the line and sewed it up. I did about 2 rows of stitching, just to reinforce the wings together.

For the straps, I cut 2 from the cotton tape, about 30cm each with a little extra as seam allowance. I hand sewed a press stud to each end of the 2 straps, then positioned the other half of the press studs on the spine and sewed those on by hand as well. The straps can just clip on and I can add or move the press studs to fit the straps better, if need be.

There's something so cool and fun about these wings! The colours and patterns are super cute, and I have to admit, I was pretty impressed with my drawing skills, which isn't normally my strong point.

THE JOY OF UNPICKING

HOW TO SEW A TOTE BAG WITH LINING | SEWING TUTORIAL 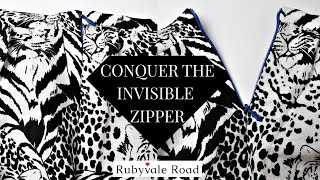 HOW TO SEW AN INVISIBLE ZIPPER

HOW TO SEW A WRAP SKIRT | SEWING TUTORIAL

HOW TO SEW AN APRON | DIY | DRAFT YOUR OWN APRON PATTERN